2 Weeks Until Kissing the Cowboy! 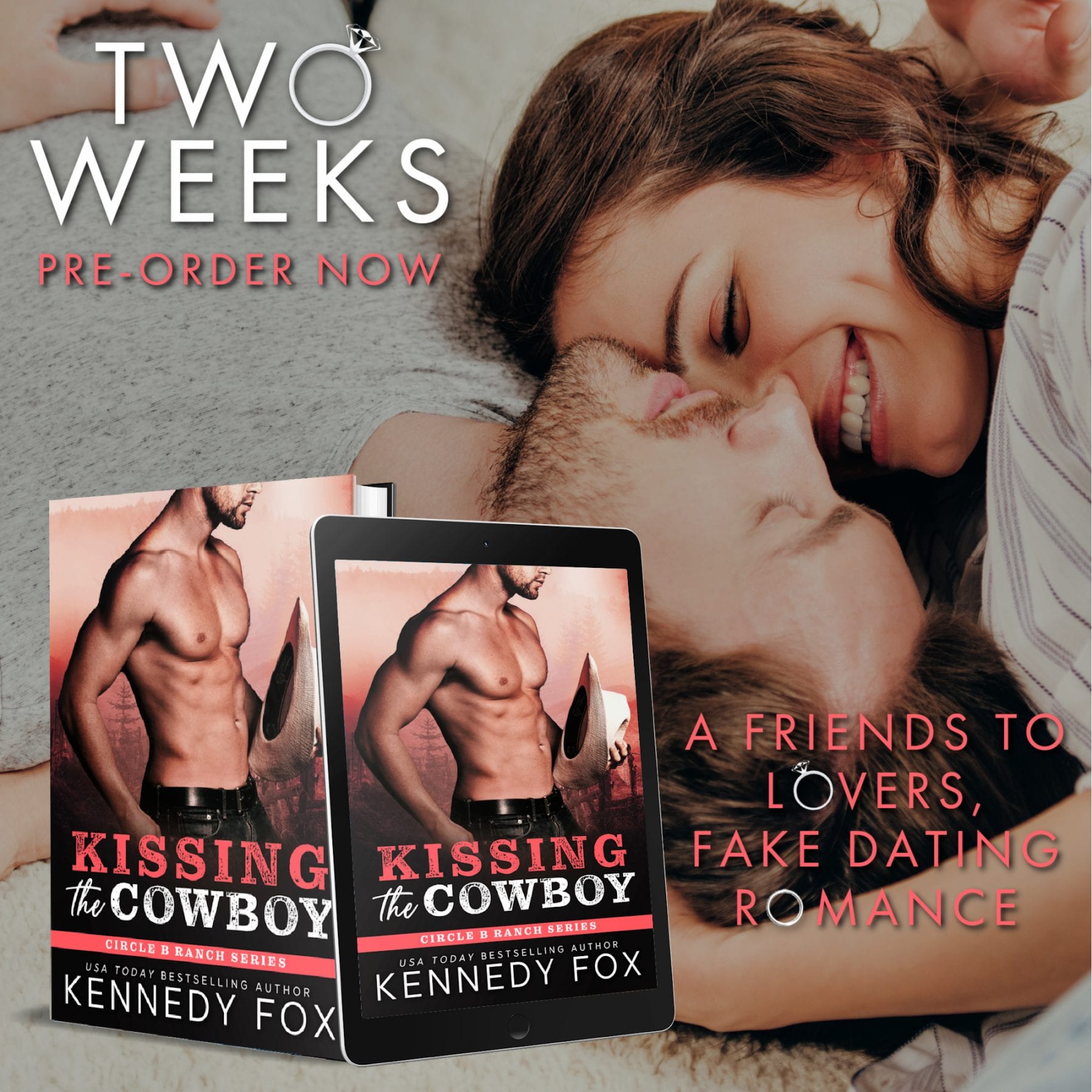 We can’t wait to share this friends to lovers, fake dating romance with y’all!

Here are some things you can expect:

“What does your hat say?”  Elle asks and continues as she reads it aloud, “Single & Searchin’?”

I immediately look for myself because I hadn’t noticed it said anything.

Harper snorts. “No it doesn’t. It says ‘Hello Sunshine.’”

Elle looks at me with a raised brow. “Your reaction though told me everything I need to know. The classic I wish Harper was my girlfriend  panicked look. When are you two finally gonna admit it?” She crosses her arms over her bump, and I scowl at her lack of filter.

“Admit what? That we’re best friends?” I keep up with my denial. For years, Elle has consistently teased about how Harper and I act when we’re together. I’m sure my sister’s hoping one day we’ll confess our undying love and she’ll gloat about how she was always right. Sometimes it’s easier to just bury my feelings than to actually confess being in love with my best friend, especially since she doesn’t feel the same and it’d just make things awkward.

“Mmhmm,” Elle says, pointing between us. “You two ain’t foolin’ me. Just wastin’ time when you could be makin’ me an aunt. You’re my only chance to become one, ya know?”

Wishing we weren’t having this conversation right now, I glance over and notice the water balloons, and my eyes widen in panic.

“What?” Elle and Harper ask at the same time.

“Dad told me to tell Uncle Jackson absolutely no water balloons this year.”

Elle grunts. “Dad can’t control him. No one can. But damn, he’s gonna be pissed when he sees these special ones he got. I heard Kane say they ordered them months ago.”

“Are they super sized?” Harper asks just as Jackson holds up a water balloon that’s five times the normal size. His gaze zeroes in on us—his targets. Seconds later, he’s running with it.  Elle puts her fingers between her lips and releases the loudest whistle I’ve ever heard.

Conversations stop and everyone focuses on her.

Elle clears her throat and points her finger at our uncle who looks like he just got scolded. “I am pregnant. And I’ll kill you. So save it for someone else.”

“Don’t do it, Dad,” my cousin Kaitlyn adds. Soon everyone in the family is running off and begging Jackson not to throw it at them.

My eyes go wide as Jackson takes four steps forward before lifting his arm and throwing the balloon straight toward us. Elle screams at the top of her lungs moments before Connor blocks her and takes a direct hit. When Connor turns, he’s soaked. Olivia bursts into a fit of laughter, then everyone else does too.

Minutes later, Grandma’s hurtling through a crowd toward us.

“Jackson Joel Bishop!” No matter how old grandma’s children get, they’ll never be too old to get yelled at.

“Mama, calm down,” Uncle Jackson says, chuckling when Grandma takes off her boot and acts like she’s gonna whip Jackson with it.

“You never irritate a pregnant woman in her third trimester!” Kiera, Jackson’s wife and love of his life, scolds just as she throws two balloons in Jackson’s face.

Harper’s laughter fills the air just as I hear a groan from behind us.

“Uh-oh,” I say, seeing the irritation written all over my dad’s face.

“Didn’t you tell him what I said?” he asks as he passes me. Next thing I know, there’s a full-blown water balloon fight between them all—one that Uncle Jackson starts. It ends with Grandma threatening to kick all their asses if they don’t stop acting like children.

“Evan Tyler, you’re supposed to be the responsible one,” Grandma scolds as she picks up the balloon scraps.

“You mean the old, boring one,” Jackson taunts, shoving my dad’s chest.

“Ahh yeah.” Alex sighs with a smile. “It’s a good day to be the youngest sibling.”

John snorts, shaking his head as he helps grandma with the trash. “Says the first one to become a grandpa. You’re the old man ‘round here.”

At that comment, Alex chases after him but John speeds up, weaving around the food and nearly knocking over the dessert table. The fact that they’re in their fifties and can still run without getting a cramp shows how hard and long they’ve worked on the ranch.

“No one better ruin my pies,” Maize chimes in as we watch our fathers act like idiots. Though this is nothing we haven’t seen before. It’d be a rare event without their antics.

“John Joseph Bishop, you stop it!” Grandma shakes her head as Grandpa joins the party, barely phased by what he’s stumbled into.

“Alexander Scott, get back here and clean up this mess,” Grandma demands.

You know it’s serious when she’s whipped out all four of their middle names.

PRE-ORDER TODAY
CATCH UP ON THE SERIES