3 Weeks Until Kissing the Cowboy! 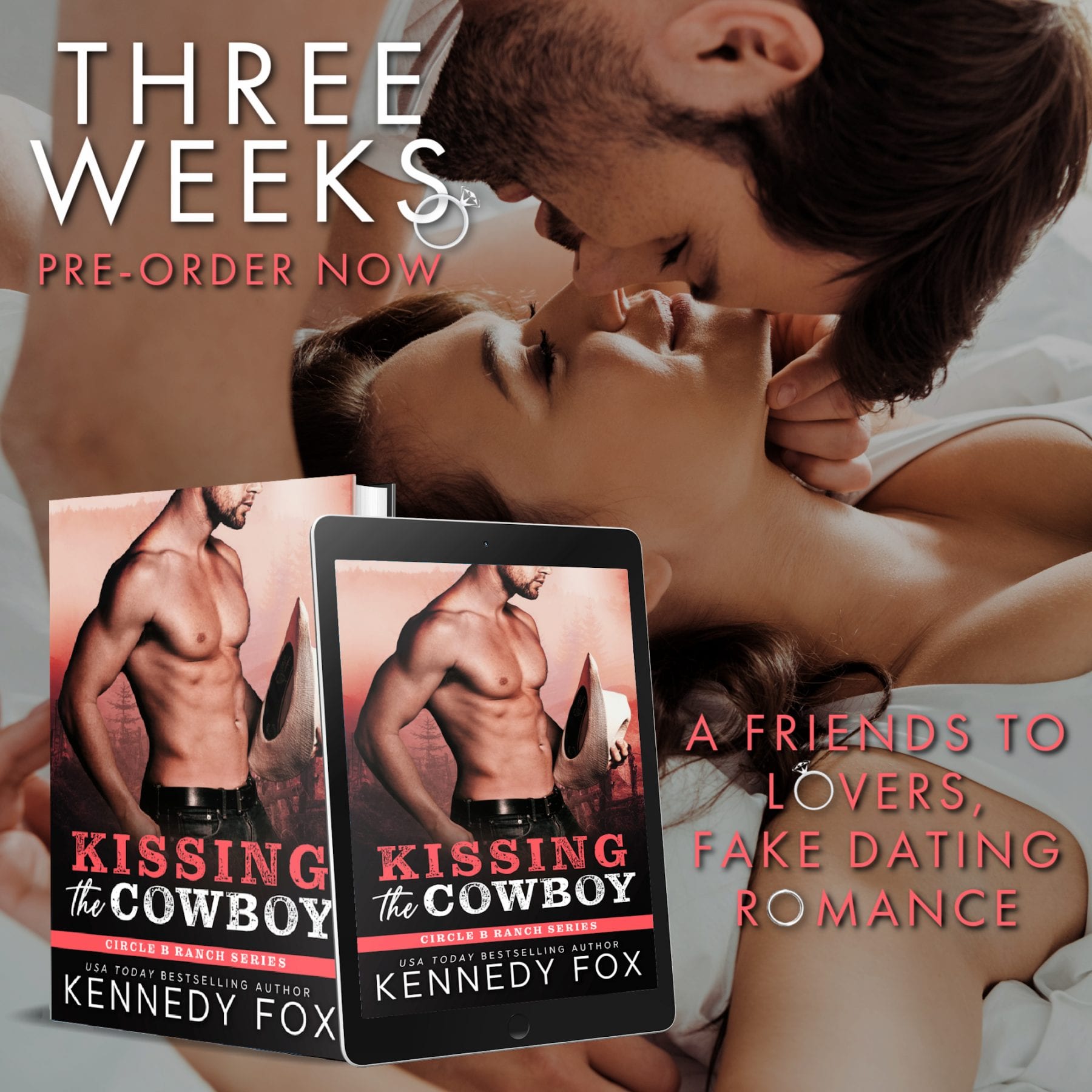 We can’t wait to share this friends to lovers, fake dating romance with y’all!

Here are some things you can expect:

Once she walks off, Grayson and I take a seat. “So you wanna hang out tonight?” he asks.

“Can’t. Harper and I have plans,” I tell him before taking a large bite of pancakes. “Maybe tomorrow.”

“I wouldn’t mind if you were ditchin’ me for some ass but this only friends shit you’re feedin’ everyone doesn’t cut it.”

I chuck a piece of my food at him. “Shut the hell up. You’re just mad because you’ll be drinkin’ alone on a Friday night.”

“And jerkin’ off to thoughts of Kenzie,” Gavin says, appearing from behind me.

“Dude.” I glare at him as he stands next to the table. “That’s my cousin.”

“Like you weren’t thinkin’ it.” Gavin shrugs, snagging a piece of bacon off Grayson’s plate. “I better go check on Maize. Girls kept her up half the night and since I’m the one who got her pregnant, she threatened to castrate me at four this morning.”

“Ouch. I’d take an extra plate with you just in case. Cover your junk.” I snicker.

As Gavin goes to the kitchen, more of the ranch hands enter. It’s filled with guests and workers, all eating and talking.

“Better watch out for Cinnamon Roll. She nearly bit off my hand this morning,” Payton says as he digs into his eggs. “Feisty little shit.”

I chuckle. “Didn’t work with goats in Montana?” That’s where Payton’s originally from but he grew up handling horses and cattle.

“Not these breastfed, clingy types.” He grunts. “Texas animals are a pain in my ass.”

“Better get used to it if you’re stayin’ a while,” Luke interjects.

Payton shrugs but doesn’t clarify how long he’ll be here. He’s new to the ranch but I know his time here may only be temporary. We aren’t close because when I’m not working, I’m with Harper.

When I’m done eating, Maize and her workers refill the buffet. I put up my dirty dish, say my goodbyes, then leave with Grayson trailing behind me. When I make it to my truck, my phone bings with a text.

“Harper?” Grayson smirks as he goes to the side by side he drove here.

Harper: I’m all out of coffee! Are ya able to bring me some from the B&B? It’s an emergency! 😉

“By the love-sick look on your face, I’d say I’m right,” Grayson taunts.

“Shut the fuck up.” I grunt, typing my response.

Ethan: Of course, be there in fifteen.

Going back inside the B&B, I run into Maize again and she gives me a suspicious look as I fill a to-go cup with coffee.

“Just grabbing it for Harper,” I admit while adding creamer and sugar.

“You know we all have a bet goin’ on when you two will finally hook up.”

I look at her with horror in my eyes. “Excuse me? Y’all better not.”

She shrugs with a devilish grin. “According to Grandma, all the Bishop men are as stubborn as mules. And since you’re actin’ like one, we started placing bets.”

“What are the stakes?” I ask, curious.

“Up to five thousand now.”

“Jesus. Prepare to lose then.” I shrug as if it doesn’t bother me. “And don’t let Harper know about this. Y’all will embarrass her.”

“Don’t worry, we won’t. We swore we wouldn’t tell her until your wedding day.”

PRE-ORDER TODAY
CATCH UP ON THE SERIES